Along the entire 12-mile I-76 Corridor in Montgomery County, 72 VSL devices have been deployed to replace the existing 50/55 MPH static speed limit signs. Construction was completed in late 2020. The VSL devices have been activated and change based on traffic and safety conditions along I-76. The VSL signs will serve as enforceable, regulatory speed limits, not recommended speed advisories.

What will be the first active traffic management (ATM) strategies deployed on I-76?

Variable speed limit signs and a queue detection and warning system were the first strategies deployed. Construction was completed in April 2021.

What is the current speed limit on I-76?

The current speed limit on I-76 is 55mph in Montgomery County and 50mph in Philadelphia County.

Where along I-76 have VSL signs been installed?

VSL signs are installed on I-76 between I-276 (Pennsylvania Turnpike) and US Route 1 (Roosevelt Boulevard) in both the eastbound and westbound directions.

Why have VSL signs been installed?

The primary goals of the VSL installation are to better manage stop-and-go traffic conditions and reduce the occurrence of rear-end collisions.

What are the conditions that would warrant a speed limit change?

Speed limits may be changed for any of the following conditions:

Who changes the VSL signs?

VSL signs will be centrally controlled from PennDOT’s District Traffic Management Center in King of Prussia.  VSL signs will be changed both manually and via a software algorithm that will adjust speed limits based on prevailing, real-time traffic conditions.

How low can the speed limit be reduced?

The system is currently configured to reduce speed limits as low as 35mph.  The minimum speed limit will be evaluated during the rollout phase of the VSL system and may be adjusted.

On a day-to-day basis, Variable Speed Limits will not be automatically enforced. However, please note that Pennsylvania does allow automated enforcement of speed limits through work zones to improve safety for workers and motorists. Therefore, it is possible that a speed limit posted to a variable speed limit sign located within an identified work zone can be automatically enforced through Pennsylvania’s Automated Work Zone Speed Enforcement Program. For more information on Automated Work Zone Speed Enforcement, click the following link: https://workzonecameras.penndot.gov/.

How will the state police know when the speed limit is being changed?

State police will have access to PennDOT’s Variable Speed Limit software module which will allow them to view speed limits along I-76 in real-time.  They will also have access to stored, past speed limit data.

Will Speed Limits be automatically enforced?

On a day-to-day basis, Variable Speed Limits will not be automatically enforced. However, please note that Pennsylvania does allow automated enforcement of speed limits through work zones to improve safety for workers and motorists. Therefore, it is possible that a speed limit posted to a variable speed limit sign located within an identified work zone can be automatically enforced through Pennsylvania’s Automated Work Zone Speed Enforcement Program. For more information on Automated Work Zone Speed Enforcement, click the following link: https://workzonecameras.penndot.gov/.

If a slowdown occurs, how will the Variable Speed Limit Signs Operate?

Let’s say for example that traffic on I-76 eastbound traveling towards the City slows down to 35 mph.  PennDOT’s vehicle detectors would identify the slowdown in travel speeds and increase in vehicle density (congestion) and prompt the reduction in speed limits and posting of advisory warnings on roadway digital message boards (DMS) to inform motorists. What a driver approaching the slowdown from a couple of miles away would experience is a message on an electronic board indicating that a slowdown is ahead and that the speed limits are going to be reduced. Subsequent VSL devices would drop the speed limit incrementally 5 or 10mph at a time from 55 mph to 35 mph as the area of congestion is approached. Once the driver passes through the congested area, the speed limit would be incrementally increased 5 or 10mph at a time until it again reaches 55 mph. See the graphic below for a visual illustration. 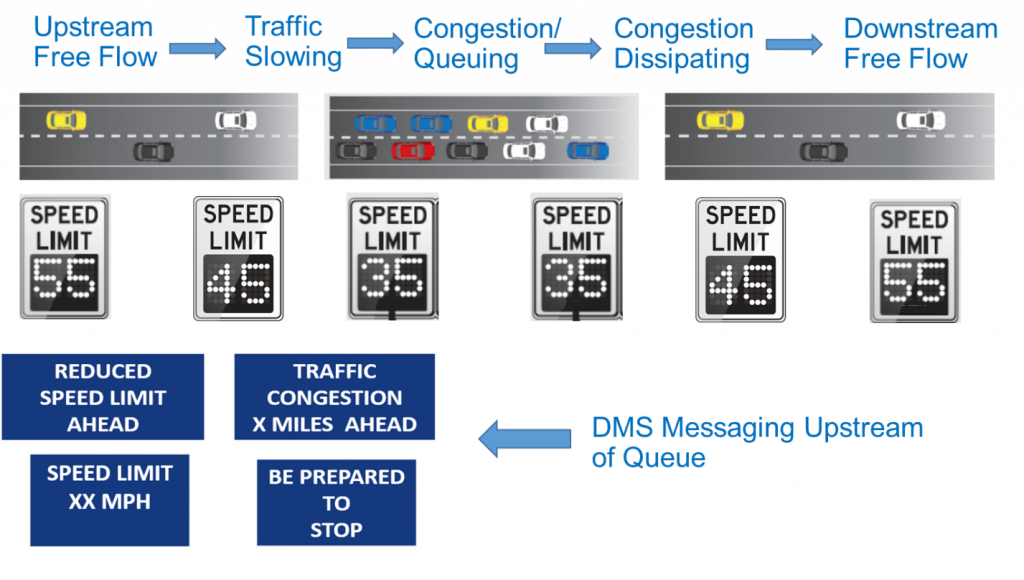 Variable Speed Limit Signs are placed in both directions on I-76 and are separated by ½ mile or less.

What happens if a Variable Speed Limit Sign is blank?

Per Pennsylvania State Law, if no speed limit is posted on an Expressway, the enforceable speed limit is set to 55.  However, it is advisable that all motorists travel at a safe speed based on the prevailing traffic and weather conditions.

Local News Articles on the Activation of VSL's on I-76

More Than The Curve

Video on How the VSL Signs Work on I-76 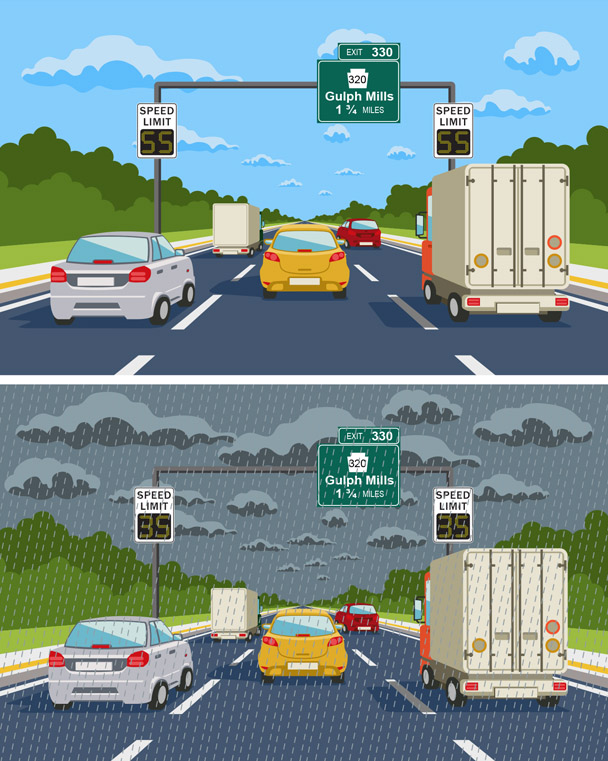